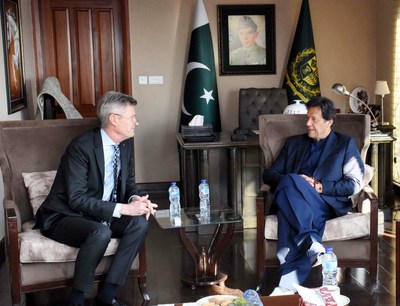 The government leaders praised Rotary for its prominent role in polio eradication and for providing vital financial support to Pakistan and other polio-threatened countries. Rotary members have contributed more than $2.1 billion dollars and countless volunteer hours to ending polio.

Rotary is the organization credited with initiating the global effort to eradicate polio. When Rotary formed the Global Polio Eradication Initiative (GPEI) in 1988, there were more than 350,000 cases of polio annually around the world. Today, due to the efforts of Rotary, its partners and world governments, the incidence of polio has plummeted by more than 99.9 percent.

In this week’s meetings, the Prime Minister acknowledged recent challenges in the effort to rid Pakistan of polio and confirmed that Pakistan considers polio eradication among its highest priorities. The Government of Pakistan has already taken a series of highly effective organizational steps to manage the polio vaccination program and provide much-needed resources to ensure the resurgence of polio in Pakistan is put to an end. General Bajwa assured the Rotary delegation of the unwavering support and cooperation of both the Army and the civil forces to ensure that every child in every community throughout Pakistan is reached with the lifesaving polio vaccine.

Dr. Zafar Mirza, Minister of Health of Pakistan confirmed the country’s improved efforts to eradicate polio, noting that during the last round of national polio immunizations, approximately 40 million children were vaccinated.

Mr. Holger Knaack expressed his satisfaction with the visit and efforts by the Government of Pakistan to eliminate polio, stating, “We are grateful to have had the opportunity to meet with key leaders in Pakistan to learn about renewed efforts to eradicate the disease once and for all. We’re confident that with the support of the government and the Army, that Pakistan will get the job done.”

Mr. K.R. “Ravi” Ravindran agreed, stating, “Polio eradication is a massive effort that will require all elements of society to band together and work towards our ultimate goal of ensuring no child ever again is paralyzed by polio.”

During their visit, the Rotary delegation met with local Rotary leaders from Pakistan, which is home to more than 230 Rotary clubs and nearly 3400 Rotary members. They engaged with some of the major donors of the GPEI, and visited the National Emergency Operations Centre, where a high-tech data collection system monitored progress against polio in real time.

While only Afghanistan and Pakistan continue to report cases of wild poliovirus, the remaining challenges to global eradication—such as difficulty reaching children amid insecurity and conflict and weak health systems—have proven to be the most difficult. In order to meet these roadblocks head on and ensure the continuation of program efforts, funding and support from donors and world governments is imperative.

Anyone can be a part of the fight to end polio and have their donation to Rotary matched 2-to-1 by the Bill & Melinda Gates Foundation. Visit endpolio.org to learn more anddonate.

Rotary brings together a global network of volunteer leaders dedicated to tackling the world’s most pressing humanitarian challenges. We connect 1.2 million members from more than 35,000 Rotary clubs in almost every country in the world. Their service improves lives both locally and internationally, from helping those in need in their own communities to working toward a polio-free world. Visit Rotary.org and endpolio.org for more about Rotary and its efforts to eradicate polio.